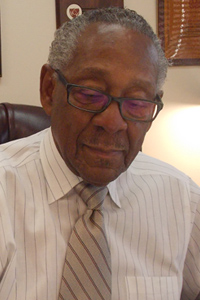 R. Edward Stewart is a graduate of North Carolina Central University with a Master’s Degree in Business Education. He is also a Veteran of the Korean War.

Mr. Stewart has served as President /CEO of UDI Community Development Corporation, since 1974 when the company was organized. Since this time the company has grown to be a major asset which includes 91 acres as an UDI Industrial Park and other commercial and residential developments.

When asked to make comments about the company, Stewart stated; as he traveled through counties in eastern North Carolina, such as Richmond, Roberson, Scotland, Nash, Edgecombe and Craven, He saw families living in cramped houses that looked like they were about to fall down. He saw babies on beds with flies literally covering their faces. He saw firsthand what the lack of access to education and the oppressive burden of poverty did to people. He never forgot those images.

Today, as UDI/CDC looks to its future, other challenges also loom large, such as creating viable partnerships with local governments and with large commercial companies to continue to close the economic gap in Durham; developing a long term succession plan so progress is not stunted by leadership changes; the idea is to stay on the visionary cutting edge with developmental ideas that continue the organization’s spectacular contributions to the communities growth.

UDI has brought more than $70 million into the community stated Mr. Stewart. UDI has also helped redirect lives of more than 120 young people through our YouthBuild Programs. Our Industrial Park has an asset base value of over $55 million, and the leadership skills that we’ve developed in the lives of people who have worked here continue to serve this community.