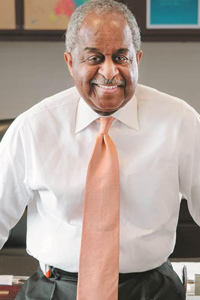 William V. “Bill” Bell has been the Executive Vice-President/Chief Operating Officer of UDI/Community Development Corporation since June 1996. He was President of UDI/CDC’s Board in 1974 and served for ten (10) years in that position

Born in Washington, DC, Bell attended the public schools in Winston-Salem, NC graduating from Atkins High School in 1957 prior to the integration of Atkins High School. He received his B.S./Electrical Engineering from Howard University in Washington, DC in 1961 and his M.S./Electrical Engineering from New York University in New York, NY in 1968. He served in the U.S. Army Signal Corps as a 1st Lieutenant from 1961 to 1963. He has worked as an Electrical Engineer in both the private and public sectors respectively at Martin Marietta Corporation, Orlando Florida, the U.S. Research and Development Laboratory Ft. Monmouth, NJ and the IBM Corporation, Research Triangle Park, NC where he retired in 1996. He and his wife (Judith) are the parents of four (4) adult children and (7) grandchildren.